One marathon a day for Purdue professor

Check out this story in the JCOnline about one of our local runners doing some extraordinary work over the next half a year. Thanks for the write up, Nathan Baird, nbaird@jconline.com 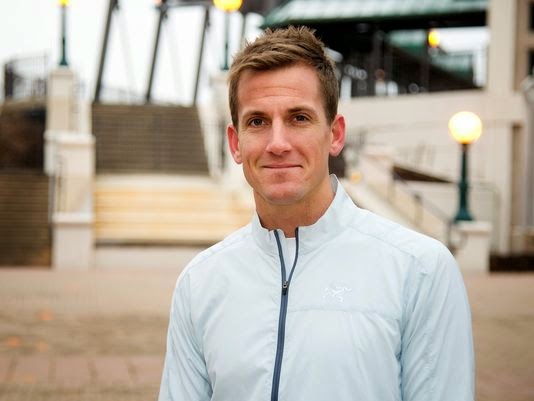 Bryce Carlson discovered an immediate physical and spiritual connection when he ran his first marathon a decade ago.
Four years later came Carlson’s first 50-kilometer race (31 miles), and before long, his first 100-mile endeavor. The assistant professor of anthropology at Purdue University fell in love with the ultramarathon community.
“As a mid-20-year-old, I thought I was invincible,” Carlson, 34, said of his beginnings in ultramarathons. “I thought I was a pretty rough, hard guy. And here I’m looking up to the athleticism of folks in their 50s and 60s. They were so cool, I just got sucked in.”
Yet Carlson isn’t satisfied with simply pushing his limits — he wants to also study them. Soon, he’ll do both.
Carlson is one of 12 runners who will complete a marathon a day for almost five months as part of Race Across USA. Covering 3,080 miles in 140 days, the event was conceived as a fundraiser for The 100 Mile Club, an organization that encourages children to run or walk 100 miles during their school year, and to raise awareness about childhood obesity.
Additionally, 10 runners volunteered to take part in a study Carlson is conducting about the effects of ultramarathons. By assembling a research team representing various fields from 10 universities and hospitals, Carlson will monitor his and the other runners’ performance and response to everything from diet to injury to psychological well-being.
“They’re almost all really excited about the research project for exactly that reason — that it will give them some insight in how their own bodies work,” Carlson said of the other runners.
Darren and Sandy Van Soye have raised more than $80,000 for The 100 Mile Club by putting on extreme distance running events. While selecting participants for Race Across USA, Darren Van Soye said he sought strong runners with a compelling personal angle.
Carlson fit both criteria, and demonstrated his passion by turning in the longest application.
“Having a professor on the running team is a big plus,” Van Soye said. “We’re reaching out to kids and we want to come up with a compelling message. Every kid’s different. We wanted to have someone professional.”
The run begins in Huntington Beach, Calif., and takes a southern route across the country. By passing through Arizona, New Mexico and Texas, participants will avoid the harsh winters in states such as Colorado.
As the event continues through the Southeast, the route has another benefit. Louisiana, Mississippi and South Carolina have some of the nation’s highest childhood obesity rates. The runners will hold speaking engagements at schools throughout the run.
While Race Across USA has two separate goals for Carlson, he sees a clear connection.
“The research project is very much going to be looking at ... how the human body adapts, how we utilize changes in behavior and beliefs and utilize technology to adapt to novel environmental stresses,” Carlson said.
“But that’s exactly what these kids are doing. These kids that we’re trying to promote more physical activity to, they’re adapting. The activity of engaging with running, with walking, with sports in general — you’re becoming more active, and that leads to changes in the body.”
Carlson, who did his undergraduate work at the University of Michigan and earned a Ph.D. in biological anthropology from Emory University in Atlanta, has been at Purdue since fall 2011.
Recent Purdue graduate Garrett Quathamer will provide logistical support for the Race Across USA running team. Participants are scheduled to run on 120 of 140 days between the start of the race and its conclusion in Washington, D.C., on June 2.
While Carlson will observe a small number of subjects, they represent all genders, ages and backgrounds. Christopher Knodel of Texas is an Army veteran who used running to beat addiction. Jup Brown of New Zealand has been running ultramarathons only for three years.
Newton Baker of Vermont is a cancer survivor who has completed 175 marathons and almost 50 ultras. On the day Race Across USA begins, he’ll turn 73.
Baker, who studied nutrition, pacing and the psychological reaction to running as he progressed in the sport, sees the benefit of Carlson’s research for himself and others.
“This is the best opportunity I’ve ever had to get some very significant, well-done medical research,” Baker said. “I would be very excited that research I accept to do could help clear up some of these physiological and mental questions that are always investigated around running distance.”
Race Across USA
For more information, or to donate in support of Bryce Carlson or the event, go to raceacrossusa.org