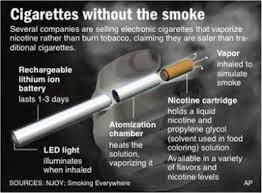 E-cigarettes with fruity flavors like "cherry crush" ignited an intense Senate debate Wednesday about whether manufacturers are trying to appeal to youngsters similar to the way that Big Tobacco used Joe Camel decades ago.
"The last thing anyone should want to do is encourage young people to start using a new nicotine delivery product," Senate Commerce Committee Chairman Jay Rockefeller, D-W.Va., said as he opened a hearing on the battery-powered devices and worries that e-cigarette makers aim to tempt young people to take up something that could prove addictive.
Jason Healy, president of blu eCigs, and Craig Weiss, president of NJoy, were challenged for more than two hours about industry marketing practices that include running TV commercials and sponsoring race cars and other events. Both men insisted they aren't trying to glamorize smoking and don't target young people and that their products are a critical alternative for people desperate to quit traditional smokes.
Electronic cigarettes heat a liquid nicotine solution, creating vapor that users inhale. E-cigarette users say the devices address both the addictive and behavioral aspects of smoking without the thousands of chemicals found in regular paper-and-tobacco cigarettes. But there's not much research on any health risks of e-cigarettes, and the studies that have been done have been inconclusive.
As the Food and Drug Administration considers regulating e-cigarettes, critics wonder whether e-cigs keep smokers addicted or hook new users and encourage them to move on to tobacco.
Healy of blu eCigs, which is owned by the tobacco company Lorillard Inc., testified that his company has voluntary restrictions in place, such as limiting advertising placements to media and events where the target audience is at least 85 percent adults.
Sen. Barbara Boxer, D-Calif., questioned the youthful-sounding flavors for e-cigarettes. Healy's company, for example, sells electronic cigarettes that come in flavors like Cherry Crush, Peach Schnapps and Pina Colada. Healy countered that the average age for consumers of his e-cigarettes is 51.
Rockefeller was not swayed, bluntly admonishing both men and telling them: "I am ashamed of you. I don't know how you sleep at night."
About 2 percent of U.S. teenagers said they'd used an e-cigarette in the previous month, according to a survey done in 2012 and released by the Centers for Disease Control and Prevention. And about 7 percent said they'd tried an e-cigarette at least once in 2012, which translates to nearly 1.8 million.
In April, the FDA proposed regulating e-cigarettes, banning sales to anyone under 18, adding warning labels and requiring agency approval for new products. But the FDA didn't immediately place marketing restrictions on e-cigarette makers or a ban on fruit or candy flavors, which are barred for use in regular cigarettes. The agency has left the door open to further regulations, but says it wants more evidence before it rushes into more restrictions.
————
AP Tobacco Writer Michael Felberbaum in Richmond, Virginia, contributed to this report.
Posted by Unknown at 7:51 AM 4 comments:

Could Fitter Kids Be Smarter Kids, Too?

Children who are physically fit might do better with reading, language skills, researchers report 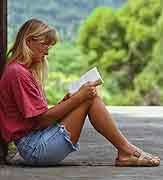 FRIDAY, June 6, 2014 (HealthDay News) -- Children who are physically fit might have better language skills than their peers who are less fit, new research suggests.
The University of Illinois researchers found these kids have faster and stronger brain responses during reading, which results in better reading performance and language comprehension.
"Our study shows that the brain function of higher-fit kids is different, in the sense that they appear to be able to better allocate resources in the brain towards aspects of cognition [thinking] that support reading comprehension," study leader Charles Hillman, a kinesiology and community health professor at the University of Illinois, explained in a university news release.
The researchers noted that their findings do not prove physical fitness (as measured by oxygen uptake during exercise) directly affects the electrical activity of the brain. They did suggest that it provides a possible explanation for the association between fitness and improved performance on certain tests of brain function.
"All we know is there is something different about higher- and lower-fit kids," explained Hillman. "Now, whether that difference is caused by fitness or maybe some third variable that [affects] both fitness and language processing, we don't know yet."
In conducting the study, the researchers used electrodes to measure brain activity. Brain waves associated with different tasks vary from one person to the next. They also depend on the type of activity or stimulus.
The study, published recently in the journal Brain and Cognition, focused on brain waves associated with word recognition and grammar.
The study showed that being fit was linked with stronger brain wave activity in these two areas when reading normal or nonsensical sentences. The researchers suggested that's why the fit kids could process information more quickly than less fit kids their own age.
The researchers pointed out that more studies are needed to investigate the link between improved brain function and physical fitness in children.
More information
The U.S. National Library of Medicine has more about the benefits of exercise and physical fitness.
Posted by Unknown at 12:39 PM No comments: