All credit to the JCOnline, story by Mike Carmin & photo by Purdue University. The story can be found HERE. 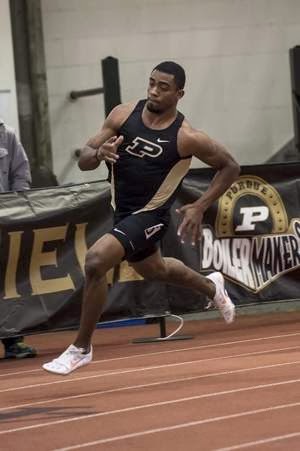 Maybe it was enduring a 1-11 football season.
Maybe it was the lack of playing time at receiver and running back.
Maybe it was the fourth-place finish two years ago.
Whatever the reason, Raheem Mostert was motivated when he moved from Purdue’s football team to the indoor track season.
“You get away from football and we had a rough season last year and it was something I didn’t want to hang my hat on,” Mostert said. “I wanted to come out here and do my best on the track. When track is over, I’ll go back to football.”
The native of New Smyrna Beach, Fla., looks to continue this season’s success at the Big Ten Indoor Championships in Geneva, Ohio. Mostert, who didn’t compete last year, is seeded second in the 60 and 200-meter dashes. He finished fourth in the 60 meters in 2012.
“He couldn’t wait. He was champing at the bit to come out and run track,” said assistant coach Norbert Elliott, who oversees sprints, hurdles and relays on the men’s team. “He came out with a zest, a zeal to perhaps show his worth.”
Track is part of Mostert’s fiber.
Once he started as a junior at New Smyrna Beach High School, Mostert was hooked. Although football remained his No. 1 passion, branching out into other sports helped develop Mostert into a better all-around athlete. He’s one of three football players currently participating in track along with receiver Shane Mikesky and defensive end Langston Newton.
“It’s something I can’t shake off my shoulders. I grew up with it,” he said. “My dad and all of them told me to push myself, do other sports and get outside of football, and track was another getaway. It was another love passion I had.”
For Mostert, the event doesn’t really matter. He’s a sprinter by trade, but it’s the competitive nature of the sport that brings the most appeal.
“Being a competitor, you line up against somebody and you’re like ‘OK, let’s see what this guy has. Let’s see if he’s going to push my limits and see if he’s going to make that first twitch coming out of the blocks,’ ” said Mostert, who led the nation in average kickoff return yardage as a freshman.

“At the end of the day, it’s all out of competitiveness. That’s something that I have. I’m always going to be a competitor whether the dude next to me likes it or not. I’m going to line up and give it my all.”
In the 60-meter dash, the race can be over before it starts. One area Mostert has been working on is the start. A slow start can be costly.
“We’ve been spending extra time working on his start, working on the first phase of the race, his drive phase and trying to get him going a little bit quicker,” Elliott said.
Regarding the 200, it’s a race Mostert didn’t fully embrace in high school. He called it a “love-hate thing.”
“I really liked it but at the same time I really didn’t,” he said. “It was so long. The 200 was one of those races where it’s a man’s race.”
His best race is probably the 100, an event he’ll run during the outdoor season this spring.
“He’s a big powerful guy and it takes him a little longer to get going,” Elliott said. “That 100 meters outdoors is really going to lend itself to his advantage.”
Mostert and Iowa’s Tevin-Cee Mincy share the second-best time (6.73) in the 60 behind Michigan State’s DeVantre Whitelow (6.71). In the 200, Mostert is second (21.08) behind Ohio State’s Timonthy Faust (21.02).
“For what it’s worth, he has a little bit of confidence going in,” Elliott said. “He’s been running with so much confidence. He’s much faster, he’s more powerful and he’s determined to win. He wants to win. It’s a team sport but it’s basically you between those two lines. The fastest guy wins. He’s been running with a sense of grit and determination. That’s why I love working with football players — they have that grit about them.”