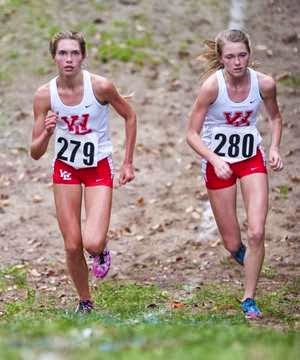 A light drizzle dampened the course at the Tippecanoe Amphitheater just before Tuesday’s cross country sectional, but it did little to slow down the West Lafayette Red Devils.
Led by a pair of victorious sophomores, West Lafayette swept the boys and girls sectional titles for the third time in four years.
“This is my favorite weather, where it’s drizzling a little bit and there is no sun beating down on you,” said WL junior Logan Berndt, who finished ninth.
Unchallenged, the third-ranked West Side girls won their fourth straight sectional, posting a perfect score by taking the top five spots. Sophomore twins Lauren and Kristen Johnson finished 1-2, finishing side by side in 18:55.
Another twin, sophomore Cooper Williams, repeated as the boys individual champion in 16:10, His twin brother Dylan was part of a pack that claimed the fourth through seventh spots and helped separate the Red Devils from runner-up Lafayette Jeff.
“We were just trying to go out there and do as well as we could to get the win as a team, and we succeeded in that,” Cooper Williams said.
Last year, McCutcheon ended WL’s streak of three straight boys sectional titles. Early Tuesday, it looked as if Lafayette Jeff would keep the Red Devils from claiming the team title before a last-mile push.
Following Williams was Frankfort’s Cody Bray and Rossville’s Solomon Heffernan, but after that came WL juniors Jake Cohen and Dominic Patacsil and sophomores Evan Johnson and Dylan Williams. That bunch propelled past Broncho runners Cayce Griffin, Daniel Feltis, Zack Vandivier and Josh Long to help the Red Devils outscore the Bronchos, 23-70.
The full story is available here.