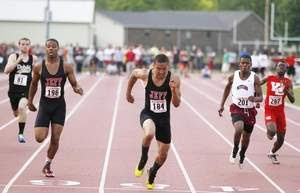 Each impressive time that flashed on the Scheumann Stadium Jumbotron Thursday night triggered a similar reaction at the Lafayette Jeff Sectional.

The crowd typically responded first with a gasp, then applause. From Matt Johnson in the 100-meter dash to the Broncho 400 relay squad to Lucas Wallace in the 200, Lafayette Jeff's sprinters gathered in the infield to exchange exclamations of surprise and congratulations.