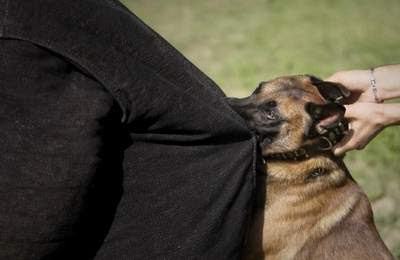 Over the past few years, Lafayette’s Omar Vasquez hasn’t had the best luck when it comes to aggressive dogs.

An avid jogger, Vasquez said he has been bitten once and avoided what he called “near bites” on two other occasions.

A dog owner himself, Vasquez isn’t sure why some canines he comes in contact with seem to be gunning for him.

“Maybe it’s my cologne,” he said jokingly. “But yeah, when it gets hot a lot of people just let their dogs out in their yards without a leash or anything. I jog by and they yell out ‘Don’t worry, he won’t bite’ or ‘He just wants to play.’ Next thing I know they’re running after me.

Actually, strays tend to be a little more street savvy and will likely avoid you. But, it's the household pet that is temporarily unrestrained that I've seen as the issue. The dog, newly free, doesn't quite know how to act and may act inappropriately without the regular guidance it gets from its owner. And, there is also the fact that some people are poor dog owners, mistreating or neglecting their dogs. You never know what the dog has been through with the  contact it has had with humans in the past. The dog may see you as being the same as that mean person that hits or kicks him at home.

Please be extra on guard if you are diminutive in stature or you have a child with you or your own pet. By nature, the unrestrained dog may be drawn to the smallest (and easiest) "target".

In the article, the suggestions provided to avoid dog bites include not breaking up a dog-on-dog fight by hand and carrying a stick with you when you are out in addition to avoiding direct eye contact.

I would like to add these other suggestions:
- run/walk or do whatever you are doing in a group
- make an effort not to back down; make yourself as big as possible (stand tall and spread your arms); It is true that dogs love to chase things. So, make sure the dog is gone before you turn to pick up the pace.
- make loud noises/yells; they don't even have to be words, just aggressive yells - telling the dog you may come after him (I've stopped many a dog in it's tracks by stopping, turning towards the dog, spreading my arms and yelling like I'm a bear.) Relatively speaking, I am tall at 6'1". But, ladies, you should make use of this tactic as well.
- squirt him with your water bottle and/or wave your hat at him while yelling.
- AND, last but not least, the tactic that works nearly every time - Pepper Spray (or it's chemical equivalent -  Mace). Dogs sense of smell, I've heard said, can by as much as 600 times stronger than ours. With that kind of a powerful nose, you don't even need to have a direct hit with the spray. But, if you do make a direct hit, the consequences will be even more significant for the dog as usually the spray will get stuck in the dog's fur. Please use this as a last resort as it is really tough on the dog.
- also, if you are seriously threatened by a dog while out, call 911 or animal control. It may be the case that you were spared from harm. But, that doesn't mean that the kid riding his bike down the street from you will fare as well.